For Rosie and Cathy

“Barbed-wire Chaplain” is not fiction; it is composed of facts and observations from my own experience over a period of five years. This period includes the years of World War II, beginning a year before Pearl Harbor — when I was fresh-caught in San Diego, and ending near the close of 1945 — after having enjoyed “my home sweet home” in Coronado for several months.

The first part of the book is designed to provide a background for the three years behind barbed-wire, which is the heart of my story. Although this is not a travelogue, I have tried in the first chapters to picture the chaplain in different and varied situations, with which most people may not be familiar.

Although this is a serious book, I did not want it to be too morbid or grim and have gone out of my way to tell of amusing incidents…as well as those more touching…and some which had to be quite morbid and grim.

This book is not designed to be history. Although I have used facts rather than fiction, and have tried to be accurate, I have not engaged completely in the kind of research characteristic of a PhD dissertation. Any mistakes –of omission, as well as commission — are of the head, rather than the heart, you may be assured.

It may seem to some that at times I have been pretty hard on our captors; maybe I have been hard, but I trust that I have been fair, which I have aimed to be. If I didn’t dislike the expression, I would say “I have told it like it was”. The fact is, an even more brutally realistic picture could have been drawn.

This account has been written in appreciation of my fellow prisoners of war, and primarily for my family and friends, without whom I would not have been able to tell the story.

Chapter I – Barbed Wire Chaplain – (Round Trip to Hell) 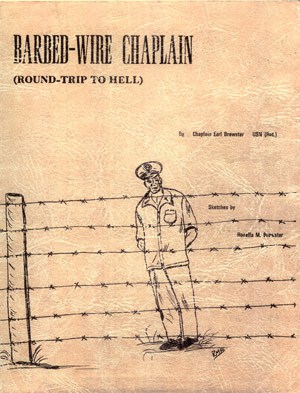 There I was — stranded on that waterfront — looking out across the bay, which had become a graveyard for ships and men. My own ship had fled the bombings, barely getting away alive and unhurt. So I had no “home”, no friends, nowhere to go. I was an orphan in a strange land, and felt something like a lost soul must feel on judgment day. It was almost a feeling of nakedness …in a frightened city … beginning to be ravaged by the hell of war. I was really “up the creek”, with no visible means of propulsion. 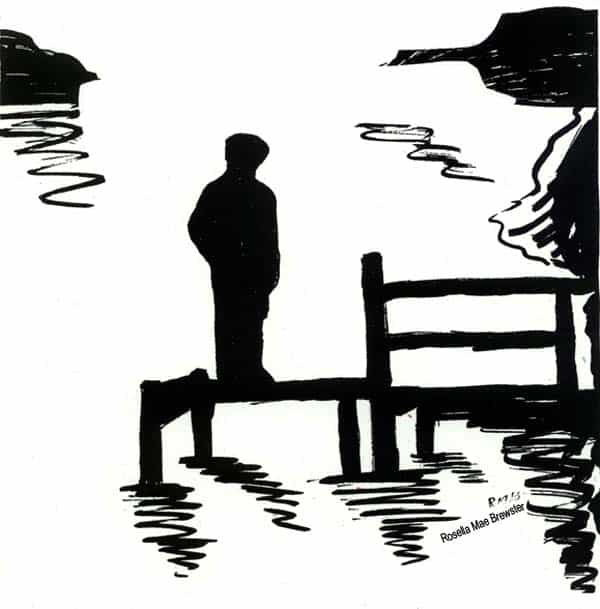 Never had I experienced such a feeling of futility and frustration. How had I gotten here? What was I doing here? And what was going to happen to me now? In order to offer answers to these questions, and many others, the following true story has been written.

After the final surrender of the Philippines, I was interned at the prison camp number 1 at Cabanatuan, Nueva Ecija, P. I. I met Chaplain Brewster for the first time in this camp and was immediately struck by his splendid example of courage and fortitude under the stress of the terrible circumstances in which we found ourselves. In this camp all Naval and Marine Corps personnel, seeking to keep together as much as possible, had managed to be quartered in the same portion of the camp. It was difficult to maintain faith and hope in these horrible circumstances, but it was made easier for all of us by the moral and spiritual leadership of Chaplain Brewster. He was our friend and counselor and a constant source of good cheer and hope. He ministered to the sick, organized a daily Bible class for us which benefited all of us greatly, and every Sunday he delivered a sermon to us which was absolutely inspiring. His efforts were endless even though his physical strength ebbed constantly as a result of the starvation we were enduring.

Finally, a group of prisoners numbering 1,000 were sent to camp number 2 at the former Davao Penal Colony in Mindanao. Chaplain Brewster and I were in this group. We all suffered terribly from exposure and the unbelievably crowded and filthy conditions on the Japanese ship during the 11-day trip to Davao. Upon our arrival there, we were forced to march about 20 miles, which, in our weakened condition, was almost beyond the limits of our endurance. It was not long after our arrival in this new camp that Chaplain Brewster developed beri-beri, the disease which caused untold suffering among the prisoners. The chaplains condition was very serious. He suffered endless, stabbing pain in his feet and legs and he was not able to get up from his bed in our crude hospital. He was very thin. Sleep for him was almost impossible since there were no sedatives and the pain never stopped, not even for a minute. He once told me, “Jack, I never knew such suffering was possible on this earth. But I will never give up.”

END_OF_DOCUMENT_TOKEN_TO_BE_REPLACED 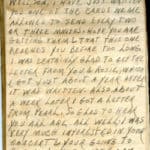 Well, son, I have just written you one of the cards we are allowed to send every two or three months. Hope you are getting them and that this one reaches you before too long.  I was certainly glad to get the letter from you and Rosie, which I got just about a year after it was written. Also, about a week later I got a letter from Pearl. So glad to hear you all are all well. I was very much interested in your concert & your going to Pomona last summer. I am anxious to hear how  you got along.  Also interested in Rosie’s working. I was surprised, but glad to hear you were still in Coronado – I thought maybe you had gone to L.B.  I have great hopes of our having a home of our own in L.B – even have tentative plans for a house. In fact, I have a lot of plans I want to talk over with you guys.   For one thing – we are going to take a 3 month’s trip though the “states” – and “see America first”!  Hope you have joined the sea scouts and that you aare reading aloud regularly, which I think will be good for you speech.  I Have a reading group here – men whose eyesight is bad – to whom I read every day.  They seem to appreciate it – and it does me good .  END_OF_DOCUMENT_TOKEN_TO_BE_REPLACED