For Rosie and Cathy

“Barbed-wire Chaplain” is not fiction; it is composed of facts and observations from my own experience over a period of five years. This period includes the years of World War II, beginning a year before Pearl Harbor — when I was fresh-caught in San Diego, and ending near the close of 1945 — after having enjoyed “my home sweet home” in Coronado for several months.

The first part of the book is designed to provide a background for the three years behind barbed-wire, which is the heart of my story. Although this is not a travelogue, I have tried in the first chapters to picture the chaplain in different and varied situations, with which most people may not be familiar.

Although this is a serious book, I did not want it to be too morbid or grim and have gone out of my way to tell of amusing incidents…as well as those more touching…and some which had to be quite morbid and grim.

This book is not designed to be history. Although I have used facts rather than fiction, and have tried to be accurate, I have not engaged completely in the kind of research characteristic of a PhD dissertation. Any mistakes –of omission, as well as commission — are of the head, rather than the heart, you may be assured.

It may seem to some that at times I have been pretty hard on our captors; maybe I have been hard, but I trust that I have been fair, which I have aimed to be. If I didn’t dislike the expression, I would say “I have told it like it was”. The fact is, an even more brutally realistic picture could have been drawn.

This account has been written in appreciation of my fellow prisoners of war, and primarily for my family and friends, without whom I would not have been able to tell the story. 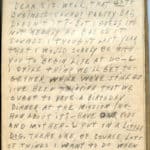 Dear Sis, well, that 40th business sounds pretty bad, doesn’t it?   But I guess it’s not nearly as bad as it sounds. I thought last year I would surely be with you to “begin life at 40” – & I still think we’ll get together while we’re still 40.  I’ve been thinking that we ought to have a birthday dinner at the Mission Inn – how about it? – have our kids and mother – put on a little dog.  There are of course lots of things I want to do when I get back – it’s already been a long time maybe I can make up for lost time.

I have gotten 10 letters in the last 2 months – including one from you.  It’s really something to get some mail after not hearing a word for almost 2 ½ yrs – but the people at home have had their periods of suspense, too, which have perhaps been harder than ours.  But I have not been doing too bad since a pretty rugged time in the hospital last year. This may not get to you before I do,  so I won’t try to put down too many details.   My birthday dinner will consist of boiled camotes & tea tonight – I saved little butter from our Red Cross boxes – will have to postpone the fried chicken & cake – hope you’ll eat a piece of each for me. END_OF_DOCUMENT_TOKEN_TO_BE_REPLACED