by Earl Ray Brewster
in Documents 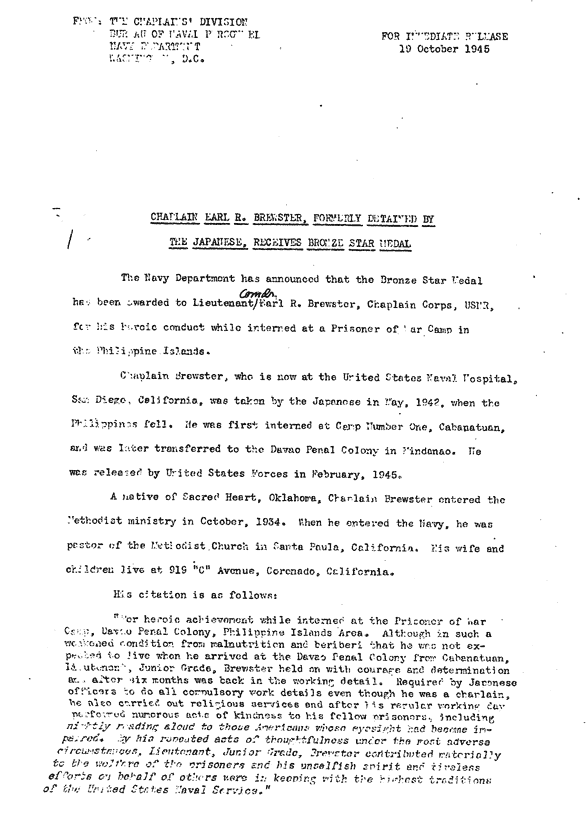 The Navy Department has announced that the Bronze Star Medal has been awarded to Lieutenant Commander Earl R. Brewster, Chaplain Corps, USNR, for his heroic conduct while interned at a Prisoner of War Camp in the Philippine Islands.

Chaplain Brewster, who is now at the United States Naval Hospital, San Diego, California, was taken by the Japanese in May, 1942, when the Philippines fell.  He was first interned at Camp Number One, Cabapatuan, and was later transferred to the Davao Penal Colony in Mindanao.  He was released by the United States Forces in February, 1945.

For  heroic achievement while interned at the Prisoner of War Camp, Davao Penal Colony, Philippine Islands Area.  Although in such a weakened condition from malnutrition and beri-beri that he was not expected to live when he arrived at the Davao Penal Colony from Cabanatuan, lieutenant, Junior Grade, Brewster held on with courage and determination and after six months was back in the working detail.  Required by Japanese officers to do all the compulsory work details even though he was a Chaplain, he also carried out religious services and after his regular working day performed numerous acts of kindness to his fellow prisoners, including nightly reading aloud to those Americans whose eyesight had become impaired by his repeated acts of thoughtfulness under the most adverse circumstances, Lieutenant, Junior Grade, Brewster contributed materially to the welfare of the prisoners and his unselfish spirit and tireless efforts on behalf of others were in keeping with the highest traditions of the United States Naval Service.

Next post: One Day at a Time – by Chaplain E. R. Brewster

Previous post: Life Is What You Make It – by Chaplain E. R. Brewster