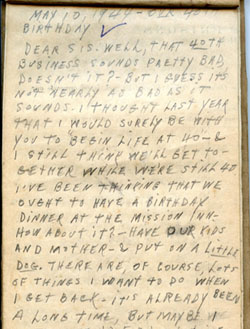 Dear Sis, well, that 40th business sounds pretty bad, doesn’t it?   But I guess it’s not nearly as bad as it sounds. I thought last year I would surely be with you to “begin life at 40” – & I still think we’ll get together while we’re still 40.  I’ve been thinking that we ought to have a birthday dinner at the Mission Inn – how about it? – have our kids and mother – put on a little dog.  There are of course lots of things I want to do when I get back – it’s already been a long time maybe I can make up for lost time.

I have gotten 10 letters in the last 2 months – including one from you.  It’s really something to get some mail after not hearing a word for almost 2 ½ yrs – but the people at home have had their periods of suspense, too, which have perhaps been harder than ours.  But I have not been doing too bad since a pretty rugged time in the hospital last year. This may not get to you before I do,  so I won’t try to put down too many details.   My birthday dinner will consist of boiled camotes & tea tonight – I saved little butter from our Red Cross boxes – will have to postpone the fried chicken & cake – hope you’ll eat a piece of each for me.

We are expecting a move soon – but we don’t know when nor where.  This is really quite a game – I have too much to live for to let it get me down – in fact, I expect to come out of it a better man – a better son, a better dad, a better minister – and I hope a better twin brother,