In Memoriam of Earl Ray Brewster – written by Leland Brewster 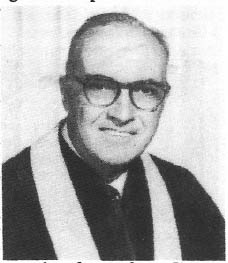 This site is made in honor of Chaplain Earl Ray Brewster and is an archive of his memoir and journals. Chaplain Brewster, along with many others, was a prisoner of war of the Japanese during WWII in the Pacific. I know he would be uncomfortable with such a website being focused on him personally so much, so hopefully this adds a little to the historical record. He would likely be focused on helping veterans through organizations such as The Disabled American Veterans Charitable Service Trust.

Earl Ray Brewster was born May 10, 1904 in the crossroads settlement of Sacred Heart, Oklahoma Territory.  Earl and his twin sister, pearl, were the youngest of seven children in the family of a country doctor who was also the pharmacist for the area.  Later they moved to California where Earl’s interest in sports, music and debating prepared him for his later contacts with people.

He later attended Junior College in Oregon and then Southern Methodist in Texas.  upon the death of his father he returned to long Beach, and was employed by the YMCA where he met Rosella Mae Traver who became his wife in 1926.  By 1929 the first son, Leland was born and Earl felt an irresistible call to the ministry.  His first church in Northern California led to an assignment as pastor to students at the University of California, Berkeley.  Other pastorates followed and another son, Leonard.  While at Santa Paula earl determined his ministry lay in the Naval Chaplaincy.  His career began in 1941 as Lieutenant, (j.g) in the Naval Chaplains Corps.  He was assigned to the Submarine tender “Holland.”  During the attach on Pearl harbor earl was ashore in a naval hospital and his ship left manila Harbor to avoid destruction. earl, along with others was captured and interned by the Japanese.  He spent three years as chaplain to his fellow prisoners, one of whom said of him, ‘I met Chaplain Brewster and was immediately struck by his splendid example of courage and fortitude under the stress of the terrible circumstances in which we found ourselves.  It was difficult to maintain faith and hope in thse horrible circumstances, but it was made easier for all of us by the moral and spiritual leadership of Chaplain Brewster.  He was our friend and counselor and a constant source of good cheer and hope.   he ministered to the sick, organized a daily Bible Class for us which benefited all of us greatly and every Sunday he delivered a sermon which was absolutely inspiring.  his efforts were endless even though his physical strength ebbed constantly as a result of the starvation we were enduring.”

In Earl’s privately circulated book about his prison camp experience he says “If I, by the Grace of God, was able to bring a message of hope and assurance of God’s love, which made the way brighter, then I felt repaid for the privilege of serving in this part of the Lord’s Vineyard.”

After the release from prison camp in 1945 and reuniting with his family, Earl was accepted in the Regular Navy.  His next duty stations took him from coast to coast.  he was forced to retire from the Navy Chaplaincy in 1959 due to a hear condition, and he and Rosella returned to California where he served as supply pastor, visitation minister and was active in civic affairs.

Earl’s lifetime ministry, wherever it was, was concern for people and helping them know the love of God, the Saving Grace of Jesus Christ and the practical application of these Divine Truths to their lives.  His life demonstrated to those he encountered in prison camp or everyday life, that, “there is a Friend that sticketh closer than a brother.”